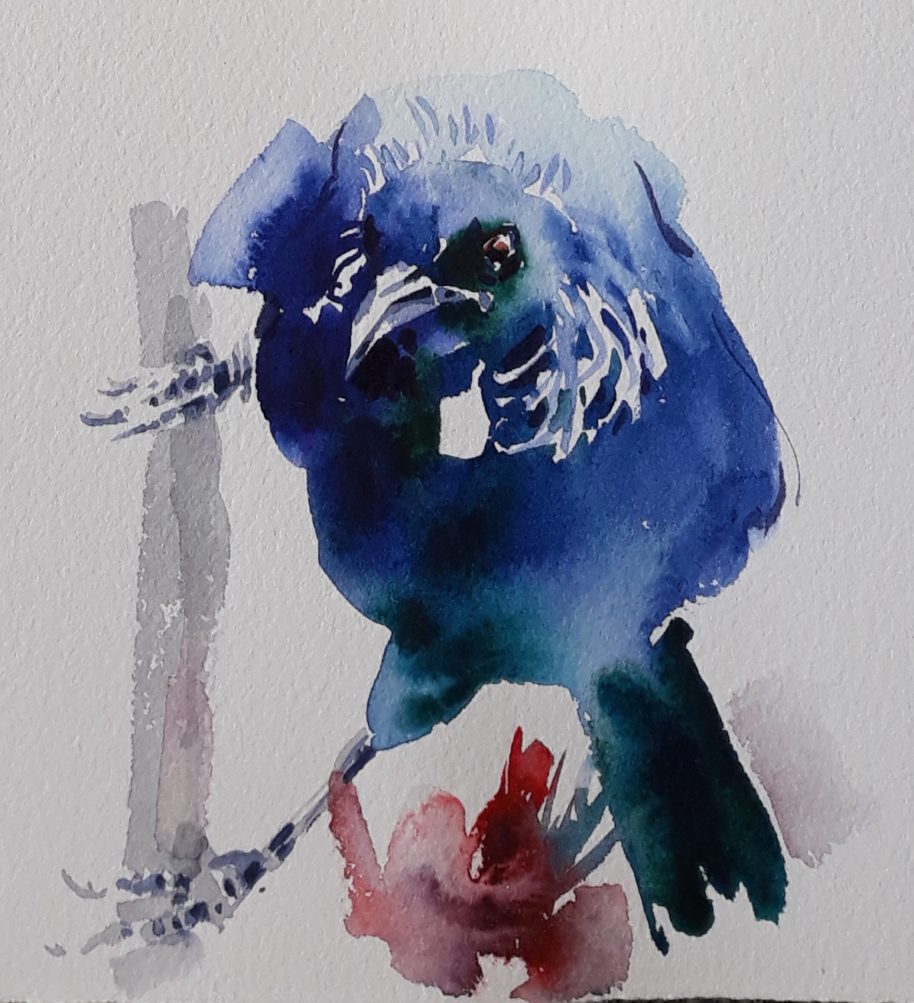 I read an engaging article today in a National geographic about NZ’s iconic Tui. It tells the story of a fledgling which turned up at the Whangarei Native Bird recovery Centre, stayed because of its damaged wing and came to be known as Woof Woof. It would strike up conversations with visitors and was overheard saying “Hello Woof Woof, where’ve you been? Merry Christmas.” Apparently the unfazed visitor responded by telling him where he’d been and Woof Woof enthusiastically replied, “Yep, yep!”

They dazzle me and though I’ve just finished a large portrait of one, I feel compelled to go on drawing and painting them. I love their boldness, their whirring wings and the intelligence and fortitude that has enabled them to flourish amid deforestation, colonisation and predator invasion, as they make their homes in the wild places and our urban back yards. My mother has a huge bottle brush and several mature deciduous trees and we sometimes sit on her couch and watch their aerial antics and the way they move in the foliage like dark oil, pulsing blue and green light.

I’m hoping they’ll come and sip nectar from our Emerald Gem flax so I can watch them turn their sleek heads in impossible ways and flash me, just for one second, a flinty eyed glare.

Eileen Duggan, a NZ poet and journalist writing in the 20th century was clearly dazzled by them too;

“Would you, remembering, tell them of the Tui?

Wild, wild and blinding in its wildest note.

They – they never heard him swinging on a flax flower, mad with the honey and the noon in his throat.

They say that in the old days stately rangatiras slit his tongue and made him speak instead of sing;

We would rather see him shining and gold – dusted,

from a morning Kowhai, flinging wide the spring.”

Drawing and painting brings me into a relationship with life that feels profoundly freeing. It creates space for stillness and reflection and a kind of soft unhurriedness where there is nowhere to go and nothing to do. 🙂